A shell is a computing environment where commands can be interpreted, evaluated, and its output displayed (i.e., an instance of a read–eval–print loop (REPL)). A good shell provides access to a rich set of commands and allows simple programming of commands, which can be used to create powerful scripts and tools.

But with great power comes great bullshittery. Commands and their options can be terse, inconsistent, and difficult to learn. A steep learning curve often prevents novices from enjoying the eventual payoff. If you’ve hardly used a command line environment before, you might want to go review this more thorough tutorial: software carpentry: shell-novice—this page is more of a discussion of common tasks and mistakes, advanced topics, and resources.

You may also want to reference the online book, the Unix Workbench.

Depending on your operating system and desktop manager, you have many ways to open up a shell. There may even be several different choices for shell programs.

Tip: IDES, such as VS Code provide easy access to a terminal (View ⇨ Terminal).

Deciding on a Terminal/Shell for Windows

In windows, you can use Cmd, Powershell, or emulated shells, such as Bash for Git, or Bash with Windows Linux Subsystem (WSL).

Cmd is tried and true, and if you made windows awesome, will mostly what you want to do. The downsides are that interactions such as copy/paste are a little clunky. However, if open up a terminal with Cmd through Code, then this problem is mostly eliminated. Powershell is a powerful shell, with great scripting support. However, the syntax is esoteric and inconsistent with any other shell you may use. For example, running common linux commands like cd ~ && ls does not work in Powershell.

Enumlated shells are useful for getting a linux-like experience in Windows. Unfortunately, there are many downsides to using emulated shells. One downside is that you may be limited in accessing other executables/environments on windows. For example, with WSL, you are actually running commands inside a small virtual machine, which limits your ability to run commands from windows. In general, using WSL, will turn on Hyper-V, which essentially breaks virtualization for tools, such as VirtualBox. In Git Bash, node packages and environment settings you setup will not work as expected when running in Cmd/etc. Furthermore, you never truly escape Windows, for example, Windows style newline endings '\r\n' may exist in files you edit, which will break bash scripts. Another common problem is that when you install packages, you will often get libraries for linux binaries, which then will not work when running outside of the emulated shell.

As a result, emulated shells seem helpful, but often create more problems than they solve.

Tip: Personal recommendation—stick with Cmd for system installation, and use a virtual machine if you truly need a linux environment.

99% of the reason you use shells is to run useful commands.

Command can run sequentially or conditionally:

Note: In Windows, ; does not work in Cmd, but does in Powershell. Use && for the most portable operation.

Try running this command that combines these shell commands.

See what happens in this case.

The UNIX shell commands push data from sources through filters along pipes. Normally, each command runs as a process and reads and writes data the following way:

Pipes and redirects change stdin and stdout from default sources. For example, we can change the stdin of a process to be piped from the output of another process. Or rather than printing to the console, we can get a process to write to a file.

Neat trick: Copy the value of a file into your clipboard!

Create a directory to store the tar file contents

Extract the archive and verify csv files exist inside the product-hunt folder.

Extract a column of text from a file, using cut, skip over first line with tail, and then preview first 10 rows with head.

Note: You may notice an error from this last command (exit code: 141) or a “write error” message in stderr. This is normal and expected behavior. After processing the first 10 lines of text, head will terminate, meaning that output that the previous commands was sending was suddenly closed, resulting in a SIGPIPE. If we wanted to make sure that we only received the contents of the file, and not stray warnings, we could redirect only stdout by using 1>.

Similiarly, we could ignore any warning output by redirecting stderr into /dev/null or NUL in Windows:

In bash, if we wanted to know the exit code of different parts of the command chain, we could get an array of exit codes using echo ${PIPESTATUS[@]}. Finally, we can toggle this behavior by setting set -o pipefail to turn pipe failure on, and set +o pipefail to turn it off.

Using a combination of cut, wc, head, tail, grep, sort, uniq, pipes (|) and any other unix suitable commands, create a command that calculates the following.

Extend the following commands to try to accomplish each task:

Warning: While this can be useful for quick and dirty analysis, for more serious processing, you will want to use a more robust csv parser. For example, using awk to count the number of fields (NF) seperated by ;, we can see, that some data may be incorrect. This is because quoted semi-columns are not being escaped by the bash commands.

Environment variables are dynamically configurable elements that are available to processes on your system.

A common problem with shells is that changing your PATH or other environment variables after an installation/OS GUI change will not affect any currently open shells. You either have to manually refresh the shell or open a new one.

Tip: One limitation of using setx is that it cannot store values longer than 1024 characters.

In bash/*sh environments, you can set temporary environment variables in two ways:

Like set, you can define a variable just for your shell session, but not for running programs.

You can also define a variable that will only exist inside a subprocess spawned from the shell. This may not behave the way you expect!

A blank is printed out because $DEBUG_MODE is expanded before the process executing the echo command is started. On the other hand, inside the node program, the process inherits the shell’s environment variables, including the DEBUG_MODE variable.

Finally, you can enable access to an environment variable for all processes and subprocesses started in the shell by using export VAR=VALUE

When a shell is initialized, several startup scripts are run for customization and initialization. If you want to make a variable always available, a common strategy is to locate one of these initialization scripts (typically in your home directory, and editing them to run your commands on startup). Common locations include: ~/.profile, or ~/.bashrc. The symbol ~, is a shortcut for your home directory: /home/<user>.

Once you have a set of commands or steps you perform frequently enough, you might find it useful to put into a bash script, including:

While you do these all in the context of a interactive shell, some of the following are particular useful for writing multiple lines of scripts.

Activity: Imagine you wanted to write a “dead” startup checker using the product hunt data. Using the script below, you would be able check if a startup’s url was still alive. Create an executable file called ‘checker.sh’, that is chmod +x checker.sh.

Exercise: Try running the script with a larger number of posts to check. How did it go?

Exercise: Go through the script line-by-line with a partner. Do you understand what each line is doing? Which ones are confusing?

Weird but useful features and commands in bash

In some situations, you might need to send multi-line content as input to a command or to store as a file. heredoc is an input mechanism that allows you to enter in text (interactively or in a script), until a delimiter string is reached 'END_DOC'. The single quotes in the heredoc marker is important—that will make sure your script commands are properly escaped.

Load the defined function. Then we can see which command you run the most.

Heredoc can also be useful for running command on input you’d like to type in manually or paste from your clipboard and don’t want to bother placing in a file. In this case, we can omit the single quotes for our heredoc marker EOF, since we’re only processing simple text without bash commands.

Count the number of lines, words, and characters in text:

dd can be useful for cloning disk drives or disk images, creating test data, and just generally wrecking havoc on disks (which could be useful for chaos engineering experiments).

Create a 1MB file with zeros.

Expect the unexpected. If you need to automate a command which could prompt for input, then you can use expect to help respond to that input.

Just as a simple example, if you ran this code python -c "print( input('Enter value: ') )", it will wait around until you typed something, which could be a problem if you’re doing this 1000s of times or run in an automation script.

By using expect, you can create scripts that automatically response to prompt inputs.

Warning: expect is not directly available on Windows.

Expect is pretty tricky to learn how to use properly, but it is a nice trick to hold on to in case you need it one day.

Using traps for resource cleanup, or implementing a singleton process.

Save the following in ‘server.sh’ and make it executable.

This will run a simple webserver, spawned in its own process.

To see what’s being served, in a new terminal window, run:

If you try running ./server.sh in another terminal, it should prevent you from running again.

Let’s stop our server (Windows): Note: this is a nice example where powershell’s scripting powers come into good use.

In many situations, you may find that you need to run commands for development or debugging on remote servers. Most likely, you will initate this connection over a ssh connection.

ssh allows you to execute commands on a remote server, such as these commands to install nodejs:

Persistance: If you need to change directories, you will need to do it in the same command: cd App/ && cmd.

Otherwise, your next command will start back in the same original directory. Because you’re sending commands over ssh, this is done in exec mode. In exec mode, each command will be executed in its own context and lose many of the shell’s functionality. ssh can operate in a shell, exec, or subsystem channels. When using a shell channel, you can interactively send commands like a normal shell. A cd operation will persist in this case.

Finally, you can emulate some parts of a terminal using -t or -tt as well as combining with heredoc to input a multi-line script.

When issuing a long running command (package installation, build job), you may find your connection drop, which could result in termination of your command!

A useful strategy to avoid this is to use a session manager, such as screen or tmux. These tools will allow you to create sessions that will persist on the server, allowing you to run commands, disconnect, and return again.

Here is a useful reference.

Here is an example for the lsof command. More examples can be found here. 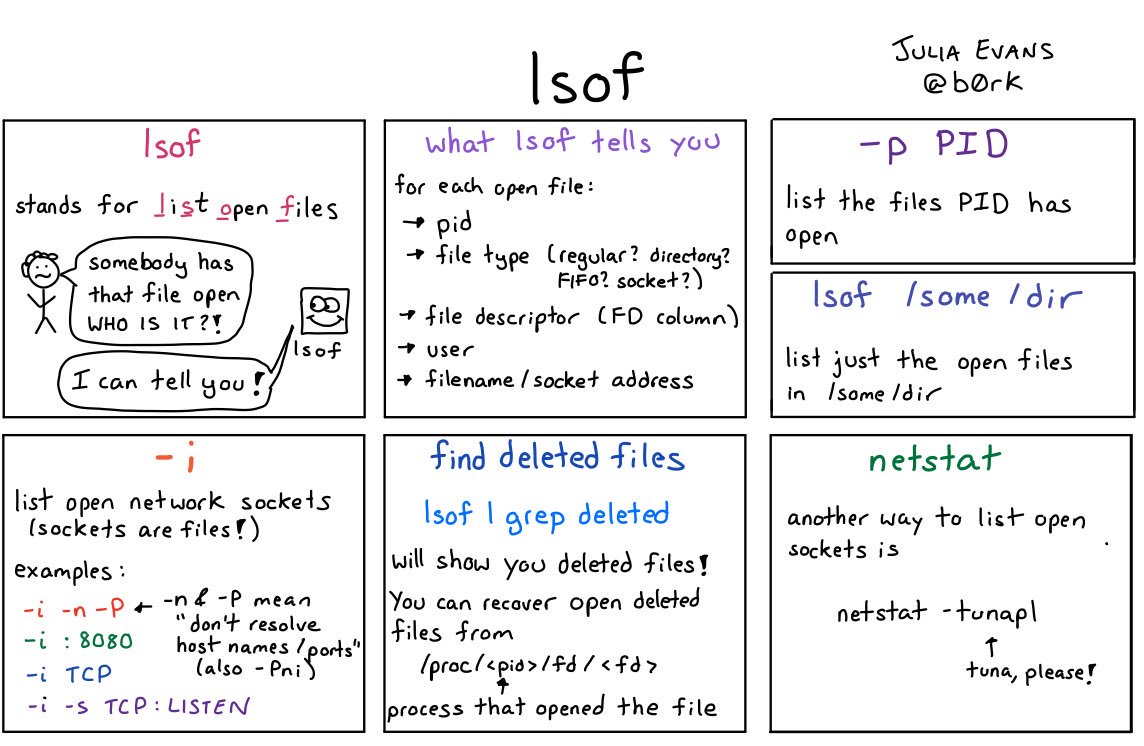 A list of command line examples for interesting tasks:
http://www.commandlinefu.com/commands/browse

Create a graphical directory tree from your current directory.

What does tar -zxvf ph.tar.gz do?